It was Eve who took the first bite of forbidden fruit then convinced Adam to take a bite. He did. Of course he did. That was the start of women’s lib.

In a way that story is the story of all women from that point on. On the one hand Eve showed that woman was fully able to make bold decisions and to lead men. She was Adam’s equal and was designed by God to be so. He made that very clear. She was to be a help meet for Adam. The use of the word “meet” is an old word but a good one. Think of it this way, “A feast meet for a king!” means a very good feast worthy of a king. So Eve was a very good woman worthy of Adam who was a very good man. Equality was part of the relationship from the start.

But that whole fruit thing got in the way and flips us to the other hand of Eve’s bold and forward thinking choice to munch. She got in a bit of trouble and was told that from then on she was to be Adam’s servant – after a sort – as God tells her in the third chapter of Genesis, “…thy desire shall be to thy husband, and he shall rule over thee.” And that signaled a very bad few millennia for women.

There’s no doubt that history had women of power and greatness. It wasn’t devoid of them. Some ruled, some plotted, some spied, some preached, and some persuaded. They made a difference and that’s good to know. But that doesn’t mean women didn’t have it bad. They did, for a very long time, they did. Early societies treated women somewhat like commodities as marriage was not a matter of choice for them but bartering. Granted, some of this was due to the tribal nature of human society at the time. The men available to you were likely your brothers or uncles. When a fine strapping man showed up at the watering hole and protected you and your sisters from a band of ruffians, well, he was fresh meat. Sure daddy was going to offer him a daughter – or two. Women couldn’t participate in society, in formal education, in debate or decision-making outside of the home. It was  a pretty rough lot for them and I don’t think anyone can argue that it wasn’t in terms of independence and power.

As time went by women, being what they are, learned to use the system they were stuck in to their best advantage and slowly they were able to shape events and the minds of people. There were women of power of course beyond the concubines who had the ear of the king. There were queens. However, they were few and represent the exception for women and power, not the rule.

Time went on and women were accorded respect. Chivalry wasn’t dead then and it represented a clear sign that men held women in a place of honor and respect. But while they were honored, even revered, they weren’t equal yet. They still had limited rights. They couldn’t inherit property, they couldn’t vote, they couldn’t work in most professions, those they could work in they couldn’t if they were pregnant and often not when they were married, and plenty of other things. As time went by this included driving a car, serving on a jury, and even getting a mortgage if they were single. Oh, they had it bad for sure.

In the late 1800’s, toward the end of the century, women decided enough was enough and they decided to fight for the right to vote. They were tossed in jail, beaten, and it seemed they were making no headway. By 1920 American women had the right to vote. The suffrage movement is entirely fascinating and exciting to read about. For me it is one of the most compelling sagas. It lasted nearly 70 years.

Having the vote gave women a broader voice by allowing them to pick their own representatives and direct the laws. They had to live under the law and now they had a part in deciding what that law would be. It was a start. The first wave. Then wave after wave of feminism moved the women’s movement forward until today.

As time has gone by from that moment of the first vote women cast on their own behalf and their own agenda the doors that were closed to them have all opened. Women hold all the jobs men hold: doctors, construction workers, police officers, mayors, members of congress, supreme court justices, astronauts, secretaries of state, generals in the armed forces and the only reason a woman has not yet occupied the presidency is simply because Hillary was such a terrible candidate but Margaret Thatcher preceded her by decades anyway. Recently women won the right to walk through the last door closed to them when they were given the right to go into combat.

Because of its own success the women’s rights movement has changed. Though it dipped, by necessity, into politics, it was not at its heart a political movement. Meaning not one meant to score political points or even concerned so much with any policy or office beyond what would get them the rights they didn’t have. Along the way, as those rights stacked up, it because a movement about “women’s issues”. Just what those issues were became the whim of those in charge and not necessarily of women as a whole. Things like abortion on demand, free birth control, and the right to dress like a slut (or be a slut) and have no one point this out.

Women like to complain about things like the wage gap but by now everyone but them knows and admits that this is a myth. There is no wage gap. There’s a choice gap. Women make choices that lead to them making less money. Period. When women do the same work as men they make the same money. A man who works 30 hours a week as a teacher makes the same amount of money as a woman who works 30 hours a week as the same kind of teacher in the same school. But choices they make can change that. Perhaps the man decides he will move to a different state to one that pays teachers more. Women are less likely to do that. Perhaps he decides to work 40 hours instead of 30. Women are less likely to do that. The man is more likely to have a degree in a job that pays higher as well, such as engineering. He’s less likely to be a teacher in the first place and she’s less likely to be an engineer. But study after study has put to rest the entire fake notion of women getting paid less than men for the same work. Did Hillary really think that if she was elected president they would offer her less money to do the job just because she’s a woman?

Now there’s nothing left for the feminist movement to really fight for. Women have all the rights of men.

Overtime it seems the movement has gone from gaining actual rights for women, the rights men have, to being more and more like men. Somewhere along the line women had to act more like men in order to prove they were equal. Again, it’s a major flaw in leftism that they only see equality in a literal sense. The Suffragettes were looking for equality of justice but today’s modern feminist is looking for total equality. The only way to achieve that is to do everything men do. But women by in large (always there are exceptions) aren’t wired like men are. They don’t like the same things, don’t act the same, don’t process information the same, don’t have the same physical attributes, they are different. That might come as a shock to modern feminists but it’s true. Men and women just aren’t the same.

The modern feminist movement is haunted by this. I think that’s the real reason they have become so upset by the image of Kellyanne Conway sitting on the couch. Not because it’s unprofessional, but rather because it is feminine, girlish even. It’s not enough that she is in the seat of power with direct access to the most powerful person on planet Earth, no, that’s not enough. Forget that she’s educated (magna cum laude), accomplished, wealthy after her own right and by her own choices, forget all that, she sat on the couch like a girl and that reminds everyone that she is a girl and therefore different from a man.

Take the left’s love affair with actress Lena Dunham as an example. Dunham exhibits an outward appearance that can at times be akin to that of a 12-year-old boy. But she goes out of her way to display her naked body as a reminder to herself and everyone else that she is in fact a woman.

She’s fighting her own nature. Mentally speaking, that has to be painful.

The author of the below article heads in this direction when she points out, “The modern practice of feminist activism has become inextricably tied to what we buy and what we wear. At the most recent New York Fashion Week, designers who seized the moment and made political statements with their looks were praised, not just by their audiences but with extra press coverage. Some models for Prabal Gurung strutted the catwalk wearing shirts that read “LOVE IS THE RESISTANCE.”

Eve was bold, decisive, and took charge and she too was worried about what to wear. Fig leaves did the trick.

For all the effort to move away from being a woman and acting like a man the movement is about clothes, vaginas, and tampons. The only thing left for them to talk about are the things that make them decidedly female. It must seem to those old school feminists from the 60’s that they’ve lost the battle. I suggest that they don’t know what victory would even look like. And I suggest that many of them no longer care about women as much as they care about power. Since they get their power from the movement, much like black activists, the movement must go on even if the struggle isn’t real anymore.

The author goes on to write, “Why is it that feminist causes are so often victim to the empty sloganeering and hash-tagging of commodified capitalism? Perhaps it comes down to risk. As easy as it is to wear a shirt or get your nails done, it’s easy for others to deem those actions insignificant.” That, of course, is because those actions are insignificant.

I think it’s because there is no real action left to be taken and no real causes for women in American to fight. They are told there are, but other than dressing like a vagina and marching in the streets for rights they already have, there’s nothing left but to do your nails and put on a t-shirt (or perhaps a vagina hat).

I believe in rights, unalienable rights, and that covers women as well as men.

Women in other parts of the world are still oppressed and living in conditions the suffragettes would find deplorable. There is still work to be done in other countries. If all you can do at home is play dress up and complain when a woman sits on a couch then that’s a clear sign you have nothing left worth fighting for. As a movement you have lost your way. 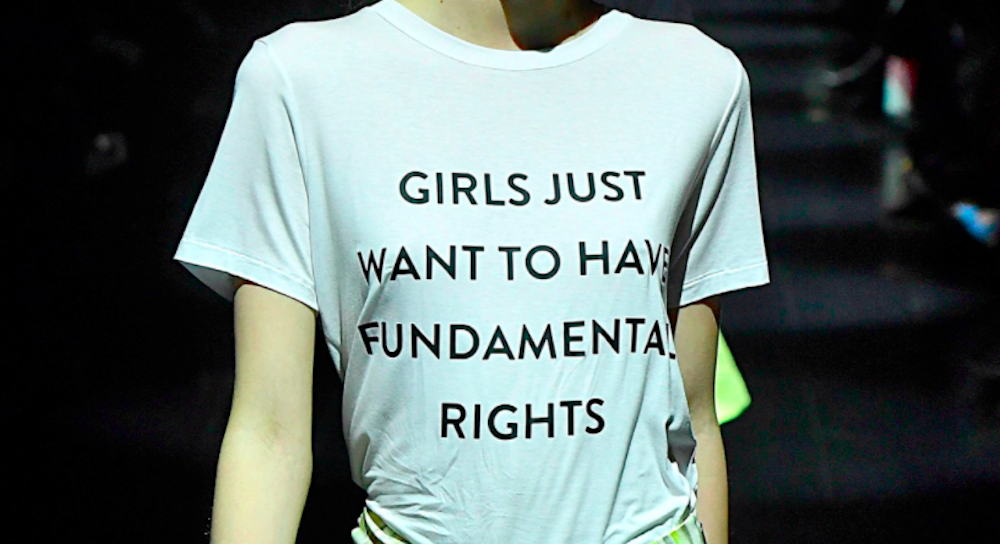 The future of feminism is futile.

Source: Nevertheless, she bought a shirt