The wall is an interesting subject to me. I don’t see it as a bad thing at all. I think nations should have borders. You do. You have a property line, a fence likely, and most certainly your house is made up of walls and your door has a lock on it. You control access to your property. As we discussed the other day with the Petoskey stone public property means that the public owns a stake in it. We all own a stake in our nation. Just as you own a stake in your yard and have a desire to control access so too does a nation.

I marvel that one argument against the wall is that “walls don’t work”. Of course they work! They worked for Jericho, for China, for Hadrian and for old Mrs. Walsh who constantly fetched your ball from her yard when you knocked on the door with another apologetic look on your face. These same people saying walls don’t work aren’t saying don’t build it because it’s a waste of money but rather than they think we should let people in. If walls don’t work then what objection could you have to building it other than a waste of resources? If your desire is to let people in and walls don’t work, then let people build the wall. Ha! Of course walls work and the people making that sorry argument know it.

Walls also have gates though so even if your desire is to let people in a wall allows for it. If a person favors open borders they should advocate for that on honest grounds explaining why doing so is a net benefit for the shared property we call America. Try not making up false reasons for a change. If human kindness is your reason, say so. Be prepared to explain why your human kindness extends to anyone and everyone who wants to enter without extending to those who already live here. While Trump took great grief for pointing out that criminals come across because he made it sound like there were more criminals among the people coming than good people, he’s not wrong to point out that open borders are, well, open. Closed and controlled borders allow for us to be the fount of human kindness we want to be and to protect ourselves from harm at the same time. It is the primary job of government to defend the nation and a wall has done that for 1000’s of years. We all know walls work. We have to ask why some people don’t want them.

That is not at all a reflection on immigrants as some would want you to believe.

It’s another point of contention with me that people argue that those who want a wall hate immigrants. That is just an illogical assumption. Are these people really so ignorant that they can’t conceive of some other reason to protect our borders than hatred of immigrants? I think of course they are lying to try to get their way. I think they know that people who want the wall want defense and not to show hatred. If they don’t know that then they really are unimaginative or ignorant.

They are also criminals, thugs, and jerks, just like anyone else. While we can’t say if little Johnnie is going to turn out to be a big fat jerk when he’s born, we can look at the criminal record of someone coming across the border. We can assess that person ahead of time. This, of course, is one main reason people are against this. It’s so judgmental. Steeped in the postmodernist understanding that all things are okay from a certain point of view they find value judgments on human beings to be most upsetting. Never mind they do it all the time too. If you know someone is a jerk and a criminal you keep them out. It has less to do with immigrants and more to do with Americans which is also part of why the self-loathing left and right don’t want a wall.

Fences make good neighbors. It’s an old and true axiom. We have to live together as a social species but we also have strong individual tendencies. These things must be balanced for a successful and peaceful life. Walls help us do just that.

I can be for immigration, love immigrants, and still want a wall. These things are NOT mutually exclusive. There is no cogitative dissonance required to hold these views. They are not in opposition to each other. If you support building a wall, don’t let others try to convince you or accuse you of holding views you do not have. If you are against building a wall, be prepared to offer a valid reason, not an emotional one, why we should not. 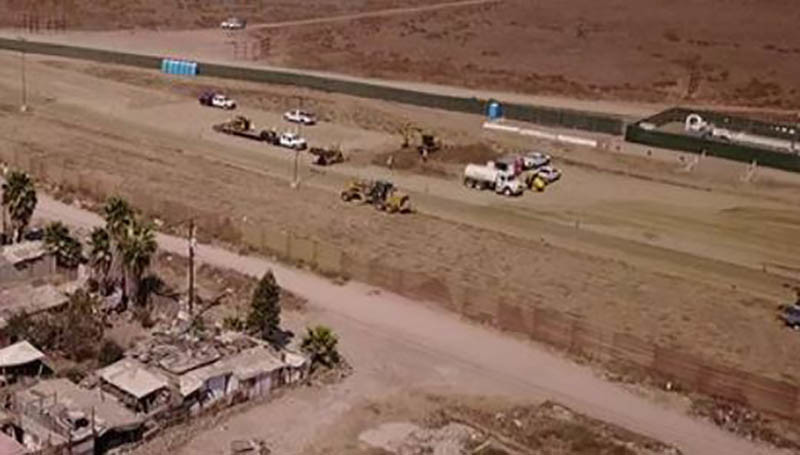 Crews broke ground Tuesday on eight border wall prototypes in a fenced-off area in Otay Mesa that is expected to be a construction zone for the next 30 days, U.S. officials confirmed.